Home  »  Uncategorized   »   Should You Send Your Child To Nursery Early?

School and education are always going to be a vital part of your child’s life, and though you may think they’re too young to start thinking about on their first birthday, it’s no doubt that nursery and pre-school groups will always be in the back of your mind.

Traditionally, children start nursery at 3 years old giving them one year before they start primary school, as UK government rules entitle all 3 and 4 years olds to 15 hours of free early education for 38 hours a week. It’s a great way of easing kids into the school routine and environment.

But should you be considering sending your child to nursery earlier than that? This is a debate that my own family recently had about my niece, and to help you decide, I thought I’d share our thoughts on the subject.

Many of our family members were of the total belief that at two years old, my niece was the perfect age to begin nursery for one morning a week.

One of the main benefits that I personally saw was in getting my niece amongst other children. As the first great-grandchild in a family whose previous youngest member is a teenager, she had no cousins or siblings her own age to interact with. We were worried that despite our best efforts, she would become too grown up too quick, or worse, spoilt, and not truly learn how to share and interact with others her age. By placing her in nursery a few hours a week, she’d have the chance to make friends, interact with people outside of her family, and learn.

Another reason as an alternative to babysitting. My sister (her mum) is extremely lucky in that her job has hours that allow her to be quite flexible, and with such a large and supportive family around her, she’s often got several options for babysitting while she is at work. However, there are still certain days when she struggles to get a babysitter even for just a few hours. Rather than the hassle of finding a suitable babysitter, and the costs that come with them, she thought it may possibly be better use of her money to take her to nursery because of the potential benefits to her daughter herself. 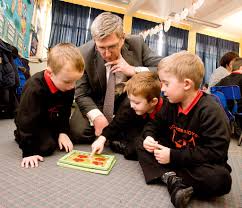 The ultimate reason, and one that can often cause some controversy, is giving her a head start on education. While it might seem unfair, pushing her into a learning environment for an extra year, we thought that perhaps it would help kick start her education and gently ease her into it. We also felt it would get her used to a routine. As well as getting her used to wearing a school uniform (albeit just a jumper) it would make the transition from part time to full time education much easier in our eyes.

While we saw many positive reasons for sending her early, many family members (some of the same ones who saw the benefits) thought that it could be the wrong decision.

Firstly, they thought that before she was sent off to spend 12 years in education, we should cherish the free time we had with her. This in particular came from my sister. As a first time mum, she felt cruel sending her beloved daughter off to a learning environment early, and sacrificing some of their time together.

One of the main concerns was cost, as my niece was not 3 yet, any visit to the local nursery would cost, and as a small family who had just got themselves on their feet, this was a major concern. However she struggled at times to find a family babysitter, so nursery or child-minder, there was going to be some cost.

As much as myself and my family could offer advice, the decision of sending my niece to nursery early was always down to my sister and her partner. So what was their final decision?

While sending your child to nursery early is by no means for everyone, for my niece it has been great. She’s learning to interact with other children her own age (she even has her first best friend), her speech and learning has come on leaps and bounds simply by being around other children and most of all, she loves it! So much so that she has started to go twice a week now.

So I hope I’ve giving you an idea of why you should perhaps consider sending your child to nursery early. As I said, it’s not an easy decision and it’s also not one that fits every family. However as each family is different, it is worth considering how it may or may not benefit yours. Whatever your decision, perhaps it will get you to thinking about your child’s full-time education and also how to incorporate a little fun learning time at home.

This post has been written by Sarah, on behalf of School Uniform Shop, who sell uniforms with kids in mind.