Home  »  Home, Family and Parenting • Literature and Education   »   Protecting Your Children on Facebook

Unfortunately, it can help you “connect and share” with people NOT in your life as well…

My boys, at 3 and 6, are a little young for Facebook yet, but, as long as its reign as the most popular social networking site continues, it’ll only be a mere few years before Christopher starts to nag me for it.

And that’s if he even bothers to ask me, and doesn’t just set up the account on his own. And that, apparently, happens a lot.

I’ve had a rather enlightening week this week, as both a teacher and a parent. As part of the new English GCSE syllabus, pupils must hold a discussion on a choice of topics, and the most popular choice for the groups in my year 11 class (ages 15-16) was a discussion of the positives and negatives of social media sites.

So last Friday I spent the day learning A LOT about Facebook from perhaps the people who know it best, and have decided to put together an article on a range of points that I feel, as parents, you might want to know.

One point raised by every group was the fact that many children open Facebook accounts without their parents’ knowledge. In fact, in every group I listened to, pupils admitted they’d done that very thing themselves.

Possibly the scariest answer was that they didn’t realise, at, in some cases, 11 years old the dangers of Facebook, and therefore, didn’t even consider that parents might be any more concerned about them setting up an account on the international social networking site than they would be with them having an email address.

Facebook has an age minimum of 13 (which I will explore later), but I know it’s commonplace for children in primary schools to have their own account. Don’t assume just because your child hasn’t reached high school that they don’t know about Facebook.

If you think your child will give you an honest answer about whether they have an account, ask them. Often, they aren’t trying to be sneaky with it, they just don’t think you know about Facebook.

If you’re sceptical about receiving the truth, check the history on the computer(s) your child uses. A computer history can easily be deleted, but with the frequency in which many teenagers and young people access Facebook these days, it’s unlikely they will have remembered to delete all evidence. (And if you find the computer has no history, it’s been deleted for a reason; perhaps you need to wonder why…?)

Facebook has an age minimum of 13, but requires no evidence at all that the person setting up the account is at least that age. 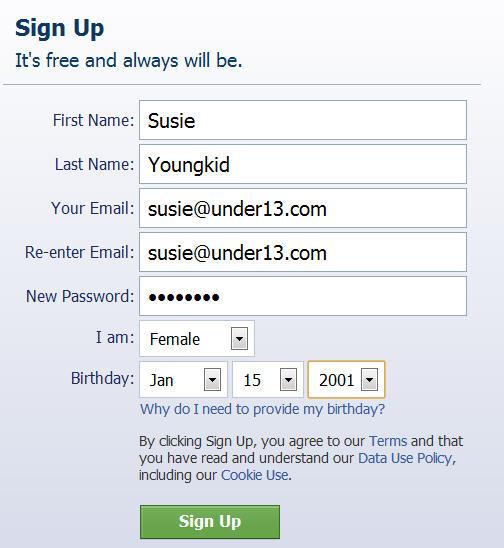 It’s not exactly rocket science to beat the system…

Consequently, if someone under the age of 13 wants an account, all they need to do is alter their birth year when they first set up the account. Providing a person has basic maths skills, it’s as simple as that.

Interesting, the majority of my year 11 pupils shared the belief that Facebook is unsuitable for young users, agreeing that pupils should be at least in high school before they have an account.

Part of this was because they informed me that on their “newsfeeds”, inappropriate videos and images appear fairly regularly, but not through any fault of their own. Surprisingly, it wasn’t pornography they were referring to. The example that crept up in a couple of discussions was of a video showing a beheading oversees. According to the pupils, the video had been reported to Facebook but not removed because the taglines were stating how wrong the beheadings were, and weren’t in support of them. Still, that’s got to be the last thing you want your child, whatever their age, to see! 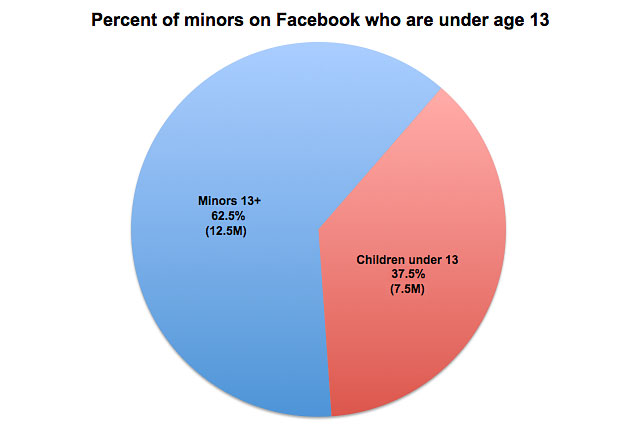 Another reason why my pupils believed younger children shouldn’t have an account was because of their lack of maturity when it comes to deciding what is and isn’t appropriate to share with the world. That’s kind of obvious, but it was nice to hear the older pupils recognising this. A couple admitted to being “mortified” with posts and comments they’d written publically when they were younger, and wished they’d opened their accounts at an older age.

It is possible on Facebook to make your account “private”, and to choose how public you want your comments and pictures etcetera to be.

But the changes you make to your privacy settings are far from permanent.

To change your privacy settings, you need to click on the little padlock icon in the top right corner.

In reality, whenever Facebook decides to “update” or “reset” itself, everyone’s privacy settings are reset as well; to the default position of minimum privacy. And Facebook can “update” itself as often as it likes.

Considering parents and schools are trying desperately to educate children on the dangers of Facebook, and encourage them to protect their accounts as best they can, the resetting of an account’s privacy settings has to be my number one issue with Facebook.

This is the page you need to learn exactly what you can do, but don’t forget: this needs to be checked regularly!

There is the most basic tutorial on privacy settings when you open your Facebook account, but it seems to be incredibly easy to miss, in amongst the more interesting “Add this, this and this” to your profile and “Search for Your Friends” links. Also, the privacy settings “tutorial” is basically a 4 sentence guide simply pointing out what you’re entitled to do if you want. Once you’ve clicked through one “page” (I use the term loosely, as I don’t the word is misleading being as it’s about 2 sentences long), you can’t go back, and once you’ve logged out of Facebook and back in the second time, the “tutorial” is gone!

It seems you have to be pretty determined and militant when it comes to exerting the little control you have over your privacy settings.

If your child – or you yourself – has a Facebook account, encourage them to check their privacy settings weekly. That, unfortunately, is the best you can do.

Bullying, unfortunately, is a fact of school life. As a teacher, I try to deal with incidents as best as I can, but you can only deal with what you know about and, sadly, so many incidences go unknown.

And bullying seems to have taken a new, deadlier form in cyber-bullying. Cyber-bullying is the term given to any type of bullying that takes place via emails, text messages or social networking sites likes Facebook and Twitter.

One good thing about cyber-bullying is that anything written and deleted on any type of social media is never truly lost, therefore evidence can always be collected against the perpetrator, unlike verbal bullying cases.

The downside is that it seems more vicious and incessant than any other type of bullying. Physical or emotional bullying generally stops when you get home; it’s harder to keep out texts and emails etcetera, so the victims of this type of bullying often feel they have no escape, and their homes, where they should feel safe, are violated.

Furthermore, cyber-bullying can be extremely cruel and vicious, as the victim’s emotional responses are unseen by the bully. It’s easier to write hurtful messages to someone when you don’t see how hurt or upset they are by it, which means bullies are also more likely to start bullying as well.

Like “traditional” bullying, cyber-bullying can be hard to spot. Classic signs that children are being bullied include mood swings, depression, withdrawal, a change in appetite, and reluctance to go to school. These can all also be an indicator of cyber-bullying (or normal, teenage behaviour!), but look out as well for jumpiness or negative response when they receive a text message.

Sadly, many young people don’t recognise cyber-bullying as “real” bullying, and so may be less likely to report it to someone, which is yet another thing to consider as a parent!

Facebook has loads of positives, but all users need to know how to protect themselves on the site. The kids I’ve spoken to seem to know a lot more about Facebook than I do, and I’ve found teenagers often like being able to teach an adult something, so don’t be afraid to ask your kids to talk you through the site.

I don’t claim to be an expert in social media, and this article is just my attempt to relay information I found interesting following my discussions with my pupils. However, if you do have any questions after reading this article, I’d be more than happy to have a go at tackling them!